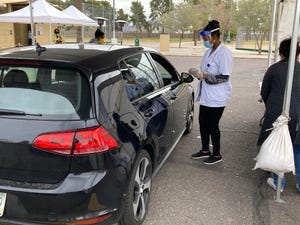 Margaret Covington, a former nurse educator from Mesa, said she wasn’t planning on getting the vaccine until a year from now.

“I was very hesitant. I don’t trust a lot because of the history of people of color, especially Black people,” she said.

But on Friday, when she heard about a Johnson & Johnson vaccination site opening up, she was one of the 330 people who got appointments to get a shot in west Phoenix the next day.

The one-day vaccination event was held at Cortez Park Saturday morning and was the first vaccine site for a community initiative to immunize underserved populations in metro Phoenix, according to organizers.

“The goal is to ensure fair and equitable distribution of the vaccine into the communities that have been hit the hardest,” said Tomas Leon, interim CEO at Equality Health Foundation.

The vaccines were offered in addition to masks, food boxes and on-going COVID-19 testing. It was hosted by several community organizations including Equality, HeroZona Foundation, Walgreens and the City of Phoenix and the Phoenix Fire Department.

More white people in Arizona have received the COVID-19 vaccines than people of color, according to Arizona Department of Health Services data. Experts attribute this to additional barriers that seniors of color face such as language barriers, medical conditions and lack of transportation options.

“We’re basically bringing the vaccine into the neighborhood to eliminate a lot of barriers that people were having trying to get to these large state-run and large POD sites,” Leon said.

Because of higher rates of medical conditions, experts also say it’s critical for low-income seniors of color to receive a vaccination since they are especially vulnerable to the virus.

The one-shot Johnson & Johnson vaccine is convenient for underserved communities and future vaccine events that will move around since people can’t always afford to take additional time off work, Leon said.

“We bring (events) right into the heart of the community and we make it convenient, accessible and it’s a familiar place and location and we do it with trusted organizations and volunteers and staff that reflect the communities we’re serving,” Leon said.

Leon said the City of Phoenix let them know about the additional 330 vaccines, which had to be used by Saturday, two days ago. When they started advertising the event on Thursday in English and Spanish, Leon said all the available slots were filled in one day through a bilingual call center.

But not everyone who called got an appointment for Saturday. Leon said nearly 1,000 people called to get a vaccine.

“Our call center got flooded,” Leon said. “It just shows the demand and the interest.”

Eligible people who didn’t get an appointment will be contacted by the group for a vaccine appointment at a Walgreens location or future event, Leon said.

People receiving the vaccine provide their demographic information and phone number while on the phone and then show their ID and are screened while at the event.

Although the event was held in west Phoenix, eligible residents from Glendale and other cities signed up for an appointment and traveled to the park to get the vaccine.

May Lee, a childcare worker from Glendale, said she heard about the issues with trying to sign up for vaccines online and was grateful she was able to get an appointment.

“As soon as we could get a vaccine we wanted one,” Lee said. “The opportunity opened up and we wanted to get one as soon as possible.”

Lee and others at the vaccine site said they encourage everyone to get the vaccine when they can and to continue being cautious of COVID-19.

“It’s a load off my mind when it comes to protecting others, not just myself,” Lee said.

Covington said her children and grandchildren all live on the East Coast and she wants to travel and see them without worrying about COVID-19.

“I won’t have to worry that I might be transmitting something to them,” she said. “I’ll feel better, it’s safer for them.”