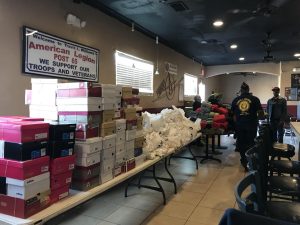 Veterans from three Arizona homeless shelters gathered in Phoenix Saturday morning. They were invited to an American Legion post for what was dubbed a ‘Forgotten Heroes Appreciation Breakfast’.

Representative Reginald Bolding from District 27 helped organize the event. He recently signed into law a bill that provides free state IDs to homeless veterans. Bolding said the work is far from over.

“We have to also make sure that we have the opportunity for jobs, healthcare, making sure that the V.A. is actually providing a system that’s providing our veterans with what they need,” Bolding said.

Not only were attendees provided a free breakfast, but they were sent home with care packages. Those included food, blankets and shoes.

Felice Wimbish-Tribue served five years in the Marine Corps. She now works with the American Legion, organizing events like this one.

“Food shows love,” she said. “So we want to serve them a good breakfast, provide them with some of the things they may need in their everyday lives and let them know that we haven’t forgotten them and we’re here if they need us. That’s the most important part of this event.”

Wimbish-Tribue said she is particularly concerned about female veterans with children.

Arizona Department of Veteran Services Director Wanda Wright also attended the breakfast. She said homelessness among veterans is on the rise due to a lack of affordable housing.

“I always think it’s a wonderful thing to kind of talk to them about our services and benefits that we have at the department and just to honor them by feeding them breakfast and just hanging out with them,” Wright said.