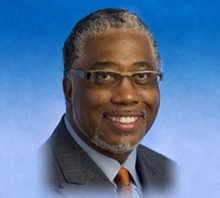 Michael E. Johnson is a local community leader who believes that the elements of collaborative leadership and hard work are an unbeatable combination.  Johnson is a founding partner at Johnson-Neely Public Strategies.  He is also a former member of the Phoenix City Council, Phoenix Police Department and business owner.

Michael Johnson served three consecutive terms on the Phoenix City Council from 2002 to 2013.  He represented District 8, which encompasses portions of central, east and south Phoenix.  His focus was on his commitment to improving quality of life for his constituents.  Putting his spirit into service, Johnson held essential roles in the development of economic, sustainable projects which impacted the district and city, many of which brought infrastructure into underserved areas.  Some of these projects include the addition of light rail and expanded bus transit services; the downtown education zone comprised of the Bioscience High School, Arizona State University and University of Arizona; the downtown Sheraton Hotel; the transformation of the Civic Plaza into the Phoenix Convention Center; the Legacy Village shopping and dining center at 24th Street and Baseline Road in south Phoenix; and multi-million dollar projects at Sky Harbor International Airport, which include terminal renovation, new airlines and the Sky Train people mover system.

His dedication to strategic leadership lead to national opportunities.  He was a member of the National Black Caucus of Local Elected Officials (NBC-LEO), a constituency group within the National League of Cities which represents the interests of African American elected officials, and was elected to serve on its

board as president.  While president, he created a luncheon to foster increased partnership between NBC-LEO and the Congressional Black Caucus.  His presidency provided him a seat with the National Policy Alliance, an 11-member coalition of African American local elected officials and policy-related organizations which meets regularly with President Barack Obama to address policy matters.  He also served on the Advisory Board of the National League of Cities.

Michael Johnson has expert experience in law enforcement and public safety after more than 21 years of service in the Phoenix Police Department.  During his time with the Police Department, he received training in several subject areas, including crime prevention, mediation, investigations and various cultural diversity topics.  He was honored as Detective of the Year in 1992, and retired in 1995 as a homicide investigator.

Johnson’s background also includes entrepreneurship.  He briefly joined the private sector after opening Nkosi, Inc. in 1996, a security and investigation firm, where he served as president and chief executive officer until he began his first term in public office.  This experience set a base for his support for the local business community, and he became a vocal advocate for the Small Business Enterprise (SBE) & Disadvantaged Business Enterprise (DBE) programs sponsored through the city of Phoenix.